Yesterday at the London Guildhall, members of The Baltic Air Charter Association (BACA) and their guests gathered for the association’s autumn lunch and the annual BACA Excellence Awards ceremony at which Dan Litten, Hunt & Palmer Cargo’s youngest team member, was the proud recipient of the “BACA Young Person of the Year Award”.

This coveted accolade is awarded to a young person under 25 years of age who is working within the air charter industry. Nominees are submitted to BACA by their peers and a winner is subsequently chosen from those submissions by the BACA Council panel, taking a number of factors in to consideration, but in particular the example and dedication that the young person has shown in their career to date.

Commenting on the award, director of Hunt & Palmer Cargo Charters, Jamie Peters said, “This is well deserved recognition for Dan who has been a true asset to our organisation since joining the company in 2014. He has demonstrated a genuine talent for our business and has proven himself time and again to be a key member of the team with a maturity and aptitude far beyond his years.”

Litten joined Hunt & Palmer Cargo Charters from a freight forwarding company but at that time had no air charter experience to speak of. Although his cargo background provided a good launch pad in the world of cargo charter, there was still a very steep learning curve, which he embraced completely. 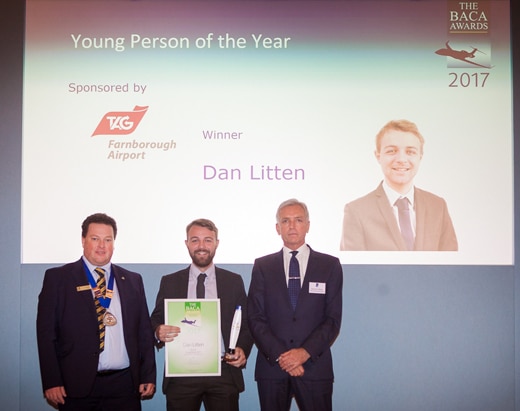 Receiving his award from award sponsor Brandon O’Reilly, CEO of TAG Farnborough, Litten announced, “I am totally taken aback by receiving this award, I had absolutely no idea that I had even been nominated let alone to have been declared the winner. I know that there are a good number of nominations for this from across the air charter industry, not just cargo but also from executive and commercial aviation operators, brokers and agents. To have been chosen from such an exceptional band of colleagues is a truly humbling experience and one of which I am very proud.”

In announcing Litten’s achievement to the audience, BACA Chairman Richard Mumford made reference to the nomination profile and industry references that the Council had considered in their deliberations, making particular note of Dan’s boundless energy and enthusiasm for his work, the professional manner in which he conducts himself and the remarkable dedication to duty he has demonstrated during his time with the Hunt & Palmer organisation. Mumford commented, “BACA firmly believes in encouraging young people into our industry, they are our future. Dan’s nomination demonstrated that he goes above and beyond the call of duty to ensure his clients receive outstanding service, he is an extremely worthy winner and I would like to congratulate Dan and Hunt & Palmer on winning this award.”

Award recipient Dan Litten concluded, “I would like to thank BACA, my colleagues at Hunt & Palmer and everyone in the industry who has supported me in achieving the award. When you come in to work every day and do a job you love, you never think that something like this will happen to you, I still can’t believe it was my name Richard read out.”

An optional peace of mind guarantee for our clients

Talk to one of our experts to find the right service for you.